What is the shell? In practice, the shell is what you get when you click on terminal button in the mouse menu on the desktop. The shell is a very powerful tool, if you know how to use it. If you are a Windows user, you might be familiar with it's shell; MS-DOS. In the G-Bar, there are several different shells, the default is BASH.

The concept of a shell is that you type a command, hit 'Enter' and the shell executes your command. If, for example, you type xmaple, a Maple session will appear. If you get used to some basic commands, you will be able to do many things more quickly than with the graphical tools.

The file system in UNIX uses a tree structure with directories (see picture).

Every folder can contain files or subfolders, which again is able to contain files and folders. The structure can be visualized as seen on the following illustration, which shows how the user s012345 with CWIS 12345 would have their home directory placed on the G-Bar structure.

The directory naming convention is /zhome/XX/Y/<CWIS> This uses a hash of the DTU CWIS number to make sure that there is a distribution of directories under sub directories, and not all get created at the top level. 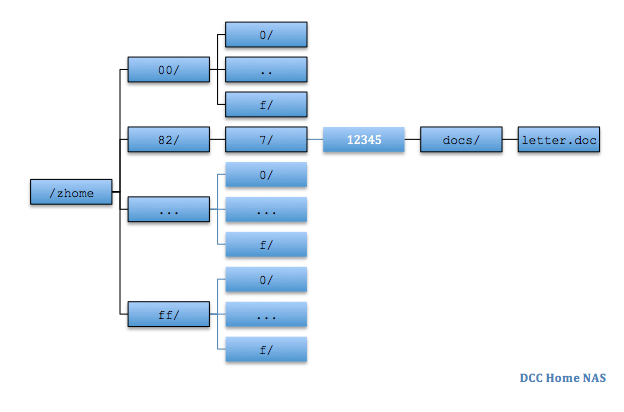 Note that unlike Windows, UNIX has no concept of drive letters (C:, D:, and so on). Instead, all files are organized into one big tree structure, no matter if they are located on a hard drive, a CD-ROM, or a floppy disk. To separate the directories in a file path, the slash ( / ) character is used, rather than the backslash ( \ ) as in Windows. The top level directory (or root directory) of the entire file system is simply called "/". Thus, the home directory for s012345 is named "/zhome/82/7/12345".

A filename that begins with "/", is an absolute filename, that is, a full path to the file all the way from the root of the file system.

A filename that does not begin with "/", on the other hand, is relative. This means that it is relative to the working directory.

Quick access/reference to your home directory

will show the contents of the "docs" sub directory of your home, from whatever current directory you are in.

The G-Bar introduction guide describes how to navigate in the UNIX filesystem. To get familiar with the UNIX system you could take a look at the links below.

24
01 2017
Please note that the IT support office has been moved to the DTU library. Latex support remains in 308.
02
12 2015
Want to take advantage of the new GitLab service, or perhaps move your existing repos project over? Check out http://www.gbar.dtu.dk/faq/94-gitlab
05
09 2014
When you log in to your studentmail https://webmail.student.dtu.dk, remember to use your student number (sXXXXXX) as username.
07
04 2015
ShareLaTex We now offer ShareLatex, an online mulituser system for making LaTex documents. Check out http://gbar.dtu.dk/faq/91-sharelatex and https://www.sharelatex.com/

IT & Computers at DTU